Before the NCAA season begins, it’s time for the now-annual venture into the murky world of NCAA scoring for those who might want to know a little more about what’s actually going on behind that bonkers 9.950 that just got thrown. Fair warning: you’ll be happier if you don’t.

Unlike on the other events, where we have skills and letters values and composition requirements and bonus rules, on vault we have simply a set of predetermined start values.

You can check out the full list of vaults and their values if you’d like, but the most pressing issue on vault is the quest to have a 10.0 start value (SV). Because the omnipresent Yurchenko full is valued at 9.95, having a 10.0 SV can provide a decisive advantage, and a lineup of all 10.0 vaults would begin with a margin of .250 over a lineup of all Yurchenko fulls.

Here is a list of the 10.0-value vaults that you’ll see with any frequency in NCAA. The golden geese of vaulting.

The vault changes for 2020 are minimal, but a notable change is the value increase for the round-off 1/2 on, front tuck (the Ivantcheva in elite parlance, which is helpful because it takes a long time to describe the vault otherwise).

This vault was previously a 9.90 SV and has been increased to 9.95 for the 2020 season, meaning it is worth the same as the ubiquitous Yurchenko full. It probably won’t be a huge deal because only a few NCAA gymnasts train round-off 1/2 on vaults, but some people who have been trying to get the 10.0 Omelianchik and struggling with it might find this an appealing opportunity to make their way into lineups with a countable vault.

And if it provides some more variety in vault lineups, then it’s a win.

With the values set, all we have left to deal with are the deductions. Just those. The most important thing you need to know about NCAA deductions is ‾\_(ツ)_/‾. Keep that in mind at all times.

NCAA pretends that it follows the JO code of points, except it obviously doesn’t. There’s a tremendous amount of subjectivity remaining in NCAA scoring, including an unwritten understanding regarding which deductions from the JO code actually count and which ones magically don’t for the purpose of scoring NCAA routines. The standard is, “We take the JO code of points, and then just ignore all of it. The end. Here’s your score. Fetch.”

So, in these sections, I’m going to deviate from (deviate from = completely ignore) the actual code of points we’re supposed to be following and instead discuss the reality of what I see getting taken from meet to meet.

This is not an exhaustive account of deductions, but rather an overview of the main things to look out for. Since only 1 element is being performed on vault instead of the normal 8, there are theoretically fewer areas in which to take deductions. As a result, deductions for issues like landing position or a well-sold fakey-stick—things that might be forgiven at the end of a bars routine if they’re minimal—are less likely to be forgiven on vault. So let’s start with those landings.

Here’s the deal with landing deductions in NCAA. Small steps will get .05 off for each step, while individual larger steps—along with hops and lunges—will get .10 off.

In general, hops are supposed to be punished more severely than steps because they demonstrate less control (two feet moving, rather than one foot moving and one foot planted), though typically you’ll see the .05 treatment also applied for very small hops, little bounces in place, and baby slides back with both feet. Not a stick, but so close to being one: that’s a .05.

A hop in place is not a stick and will be deducted, unless you’re a home team ranked in the top 10, in which case the judges will decide to go temporarily blind in the middle of your landing and treat hops in place and baby slides as sticks, even though they’re not.

But in general, there’s less benefit of the doubt given on vault for fake landings or college sticks than on the other events.

So let’s talk about those college sticks. A “college stick” occurs when there’s no way in the multiverse that a gymnast is actually going to hold her landing under control for long enough to get credit for a stick, so she decides to pretend that she did and you just missed it. Like a little skit. She won’t move for exactly one quarter of one nanosecond after landing and then will step, turning to the side and saluting the judges mid-step, all in the same motion. Kind of like she’s just so bored by her own stick that she simply can’t stay there any longer and needs to salute. This is not a stick.

“That won’t fool the judges” is what commentators often say, except it kind of will, because the NCAA judges are wimps. They’ll still deduct for a non-stuck landing but will typically take off .05 for any college stick, even if the step taken on said college stick would normally warrant .10.

To get hit with a landing-control deduction larger than .10, it typically takes a “bouncing back into the next state” kind of landing. Multiple steps, double lunges, that kind of thing.

Landing short (for instance, not completing the full laid-out flip on a Yurchenko full and coming into the mat with a piked angle in the hips and the chest too far forward) will be deducted in addition to any ensuing step, so gymnasts in those cases aren’t getting away with just the .05/.10 landing deduction.

Most vaults you see in NCAA will attempt a layout position. On those vaults, the best athletes will show a completely straight body shape throughout, like a muscly little broomstick. Ideally, gymnasts will go even further than that and show an open shape with a little arch toward the end of the vault, going beyond the straight position just because they can, Shannon Miller-style.

If performed in NCAA, the above vault should receive a perfect 9.950 (the maximum for a Yurchenko full).

You’ll hear about the best vaulters “flaring” a vault, which means they’re opening and extending their arms at the end to slow their rotation coming in for landing. This both looks pretty and also provides evidence of a gymnast who has more than enough time to complete her vault and land in a non-hunchback-of-Notre-Dame shape. Goals.

Those who exhibit a closed hip angle—less than 180 degrees—on a layout vault will face a deduction. This is typically a small deduction, depending on the degree of the angle and when it occurs. If the pike is significant or present throughout the entire vault (not just coming in for landing), gymnasts will be docked for more than .05. When the chest is just a little bit too forward on landing at the very end, that often escapes without a deduction. When you could eat a meal off your knees on landing, that’s when it becomes a major problem and moves into full tenth territory.

Both layout and piked vaults are expected to exhibit straight legs throughout, without any bent knees or hint of vestigial tucking. A “soft” or “mushy-legged” vault means the legs have a little bend in the knee throughout, which is typically a .05 but can increase based on severity.

Height/amplitude tends to be evaluated more critically on vault than on the other events. Gymnasts need to show repulsion off the vaulting table (going UP and OUT, not just out) and need to complete the vault while still in a high position in the air. Otherwise, they’ll come in short and be in line for the landing deductions discussed above, as well as an amplitude deduction. Deductions don’t exist in a vacuum. One creates the next.

There is no specific height that gymnasts are expected to reach. Instead, a vault that avoids an amplitude deduction is one where the entire vault, all necessary flipping and twisting, is completed with at least the chest, if not the entire body, above the height of the vaulting table. Then, as the gymnast passes the height of the vaulting table, all she has to do is prepare for landing. 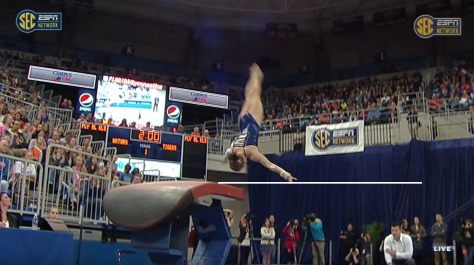 The height deductions get quite intense for flat vaults that shoot out horizontally. These are not the little .05s we see for minor form breaks. They’re getting docked at least a tenth for height.

Meanwhile, “heighth” is not a word.

Distance, too, is judged without a specific reference point, despite how easy it would be to put a line on the vault mat if someone actually wanted to. Basically, gymnasts are expected not to look like they’re about to hit their heads on the vaulting table as they come down. At minimum, they need to be far enough away that it cannot physically happen. Ideally, a gymnast would at least have enough room to be able to lie down flat on the vaulting mat between her landing position and the edge of the vaulting table. You know, a really scientific standard.

Gymnasts are expected to land in line with the center of the vaulting table, not deviating too far to either side. In elite, the vaulting mats have guidelines for the judges to be able to evaluate this. They do not in NCAA, once again because of helpfulness.

For that reason, the direction deduction is taken less frequently in NCAA than it should be, or would be if there were a specific guide on the mats. Vaults that start veering to one side or another, as long as it’s not too egregious, are still scoring really well. But technically, that should be a deduction.

Also on the topic of deductions that are not evaluated as harshly as they could be in NCAA gymnastics, leg separations on vault. The legs are supposed to be pasted together in the air on all vaults. To be deducted in college, however, it seems leg separations must occur in post-flight (after leaving the vaulting table) and be somewhat egregious and obvious—we’re seeing actual daylight between the legs—to get deducted.

A minor foot cross in the air will be forgiven without deduction, as will straddled legs in pre-flight or when contacting the vaulting table. We are presented with crazy-leg vaults from time to time in NCAA, and I don’t really see that getting deducted the way it should. Typically, the excuse is the position in which the judges are sitting, from which they cannot see straddled legs on the table. (Pssst, then maybe the judges should sit in a different position.)

A similar approach is taken to shoulder angles and bent elbows on the vaulting table, which tend to be theoretical deductions instead of real ones. They aren’t deducted in any noticeable way in and of themselves, though errors like that typically also lead to a lack of amplitude and distance, which is where gymnasts will be penalized.