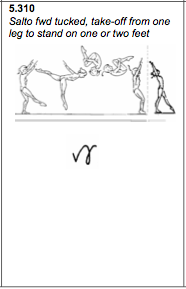 About
So, technically this skill is named after Nastia Liukin in the code of points, and I can barely even with that because the idea that Nastia invented the kickover front is preposterous. This skill has been around for so, so long and is a staple of beam routines at the non-elite level. Everyone and her aunt Patricia in NCAA and L10 does a kickover front.

What happened was, Nastia originally got the piked kickover front to scale named after herself. Later, Her Nellieship decided that the kickover front and the scale were two separate, connected elements and couldn’t be considered one skill for naming purposes. For some reason, that translated into Nastia’s name hanging around in the named skills section of the code and being assigned the tucked kickover front. Code things.