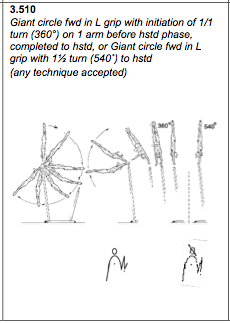 Known as
Ling 1/2
Uh……E pirouette. Like the Chinese do.

About
OK. Let’s get into it. The first thing you need to know is that you don’t need to know the difference between the one-armed E pirouettes on bars. It’s fine. You’re fine. No one is judging you. It’s hard and weird.

*Officially, the Ono and the Ling are the same skill in the code of points and therefore cannot both be performed in the same routine.

Now, the contrasting beginning and ending grips are what make these elements different skills, but that’s really no help if you’re sitting there watching YouTube videos and trying to differentiate one pirouetting skill from another, because…huh? So, here’s the best, totally non-technical, non-official way I can think of to differentiate the E pirouettes:

The Ono is the easiest to identify given the characteristic flourish of the outside arm as it passes around the body and over the bar. Think Nastia. Homegirl really sold that flourish.

Now let’s get to the more challenging part, visually differentiating the Healy from the Ling. The identifying factor of the Ling is the presence of a grip change before the initiation of the turn:

Versus the Healy, which does not show a grip change:

Now, you might be saying, “That’s literally the same skill, shut up your face.” Valid point. Beyond the opening grip, you can find the difference between these skills if you focus on Fan’s left hand in the upper example (the Ling). Right before beginning to turn, she briefly releases the bar and changes her grip to reverse. Whereas in the lower example (the Healy), she retains contact with the bar the entire time. That’s because it’s physically possible to turn from reverse grip to L-grip, but not physically possible to turn from L-grip back to L-grip without releasing the bar.

All of these turns may be performed with an extra 1/2 turn after handstand, though it is not considered a different skill and not valued any higher. The Ling 1/2 is the most common of these variations.

In conclusion, if you just want to call them all E pirouettes, that’s cool.

Each of the female names of these skills (Lin, Bi, and Ling) were formerly credited in the code of points but disappeared along the way, probably because of conspiracies, but you will commonly hear Lin, Bi, and Ling all used in women’s gymnastics.