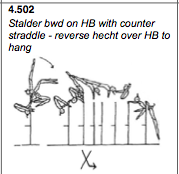 About
Much like the Shaposnikova family, the Tkatchev Family of Elements is many and varied. The Ricna is among the earliest and, as such, has had plenty of time to become ensconced in the terminology of gymnastics, so you’ll typically hear this skill referred to as a Ricna rather than by its description, whereas many of the newer Tkatchev-style elements are named by description of the skill for the sake of universal clarity and also…who can keep track?

If you want to try, refer to the Shaposhatchev Dictionary

The Ricna has an interesting naming history because back in the olden days, there were two Stalder Tkatchev elements in the code of points. The first was a Stalder-to-handstand Tkatchev, performed by Ricna as basically a full Stalder circle followed by release and regrasp, and the other was a Stalder-not-to-handstand variety that more resembles the Stalder Tkatchevs of today. And yet, when the code fully adopted the not-to-handstand variety as the way this skill should be performed, the Ricna name remained.