Despite Alabama’s…shall we say tumultuous…summer (too euphemistic? The Crimson Tide Summer of What’s Racism?), the team plunges ahead into another season with a trio of freshmen joining the squad.

Most significant among the group will be former elite Shania Adams, who has been competing at US nationals since the early Truman administration and most recently placed 12th at senior nationals in 2018, the highest-ranking elite from that year who’s entering college this season. The last time we saw Adams was American Classic in 2019, following her switch from Buckeye to Future, where she placed 3rd all-around.

Cameron Machado does not have quite the elite experience as Adams, but she did compete as a baby junior in the previous quad—hitting the elite circuit in 2016—before opting for the L10 route the past couple years. Most recently, Machado placed 17th all-around in her junior session at JO Nationals in 2019, marked by a 10th-place result on bars.

On the opposite end of the experience spectrum is the third member of the class, Sarah Duhe, who had just qualified to Level 9 when Adams and Machado were competing together at elite nationals in 2016. Duhe participated in her first L10 competitions in 2019 and is walking on to the Alabama team in the hope of providing a vault, certainly her best event.

END_OF_DOCUMENT_TOKEN_TO_BE_REPLACED 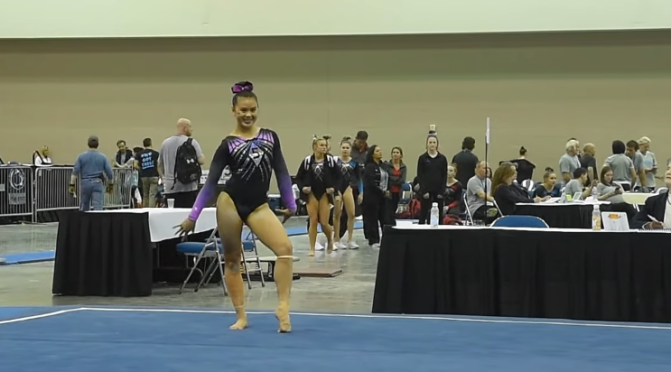 Florida’s incoming quartet for 2021 is, to some extent, a makeshift class. In a different bubble of the multiverse, we are arriving at the post-Olympic college season with a bevy of elites sashaying into college gym to get their 10s. Instead, we all got the dud timeline and Florida will have to wait for the 2022 season for that elite explosion.

Nonetheless, Florida has gone to work to swap the 2021 class with the 2022 class, getting a couple essential junior-elite-to-L10s to start a year early to protect against a down season in 2021. So while it may be a makeshift class, it’s Florida, and Florida can make a pretty good shift.

Headlining this year’s class is Ellie Lazzari, a former junior elite who probably could have made quite the impact as a senior elite had she gone that direction. Rather, she joined the many (many) college newcomers this year in saying “that’s enough for me and this” to elite after 2017, returning to L10 gymnastics in 2019 to clean up all the awards. Lazzari won the all-around title at 2019 JO Nationals while placing no worse than 4th on any event.

Partnering with Lazzari in Florida’s class exchange program is another former junior elite, Gabbie Gallentine‘s Day. Gallentine’s Day ventured into junior elite for a couple years in the early part of this quad, making her mark on the Everest special: bars, which pretty much always garnered her best placement. Gallentine returned to L10 in 2020 to make a few appearances in preparation for college.

Joining the class this year to add some routines will be L10s Chloi Clark and Alex Magee. Clark had her best result in 2019 when she advanced to JO Nationals and finished 4th on vault. In 2019, Magee finished 3rd at Florida states on bars, which is nearly always her strongest event.

END_OF_DOCUMENT_TOKEN_TO_BE_REPLACED

Denver continues to signal its arrival into the higher echelon of college teams through a quintet of freshmen with a classic top-10-school career breakdown—four ninja level 10s with strong national all-around results to their names, plus one who took a momentary dip in the senior elite pond.

The most recognizable name in the group is probably Isabel Mabanta, who competed as a senior elite in 2018—qualifying to Classic—and who made waves for her sublime execution on beam. She has competed only sparingly since that 2018 elite season, but she did make an early-2020 JO cameo to reassure everyone that she can still ‘nastics.

The host of JO athletes in the class is headlined by Rylie Mundell, a lifer L10 who qualified to nationals every year from 2015-2019 and notched her best-ever result in 2019 with a 4th-place all-around showing, finishing top 8 on all apparatuses. She followed that with a 7th-place AA finish at the 2020 Nastia Cup, right before the shutdown.

In that 2019 JOs performance, Mundell finished 0.4 ahead of now-teammate Abbie Thompson in 6th place (though at the time Thompson was a West Virginia verbal who later switched things up to come to Denver). Thompson’s performance highlight was a 4th-place result on floor, the one apparatus where she outscored Mundell.

Placing 6th AA at that same JO Nationals was Rose Casali, though she did so in a younger age group as one of the many (many) incomers this year who was still competing as a junior last time we saw her at L10 nationals. Way back in 2017, Casali placed 2nd in the junior division at the Nastia Cup with top-4 finishes on every event.

Another who excelled as a junior was Jessica Hutchinson, who has been showing up at JO Nationals since 2014 and had her best result in 2016 with an 8th-place all-around finish. In 2019, Hutchinson returned to L10 nationals with a 10th-place finish on floor, where she fassst-twisted her way to a strong score.

END_OF_DOCUMENT_TOKEN_TO_BE_REPLACED

A. European Championships…still a go?

Despite a flurry of withdrawals, the nominative rosters have been released for December’s European Championships in Turkey. That’s still, we guess, going to be a thing.

Of note, exactly 8 women’s teams have entered a sufficient number senior athletes to get a team score, meaning all of them would advance to the WAG team final. That’s Ukraine, Romania, Hungary, Turkey, Czech Republic, Latvia, Croatia, and Luxembourg. Yes, Luxembourg has entered 3 seniors. It’s the only thing keeping me going. This seems like a wildly ill-advised and preposterous championship that I am growing more excited about by the minute.

The juniors will have an all-around but no team competition this year, and since there are only 20 athletes eligible for the AA final (after 2-per-country), those countries sending full teams will just have an intrasquad in qualification to see who gets Wiebered, and those with two or fewer will be automatically in.

On the senior men’s side, there are 11 senior teams with at least three athletes: Turkey, Ukraine, Israel, Hungary, Romania, Austria, Azerbaijan, Bulgaria, Czech Republic, Croatia, and Lithuania. Though, some of these teams like Lithuania and Croatia are only maybes in terms of being able to cobble together three routines on each event. I hope Croatia tries again. My sole dream on the men’s side is for Croatia to default into the team final and have everyone vault handspring timers like at 2018 worlds. There’s definitely something wrong with me!

Today, we learned that Riley McCusker is suing Maggie Haney for all of the…all of it—bullying, body shaming, unhealthy diet, period prevention, and strenuous training on injuries including 2019’s exercise-induced rhabdomyolysis.

END_OF_DOCUMENT_TOKEN_TO_BE_REPLACED 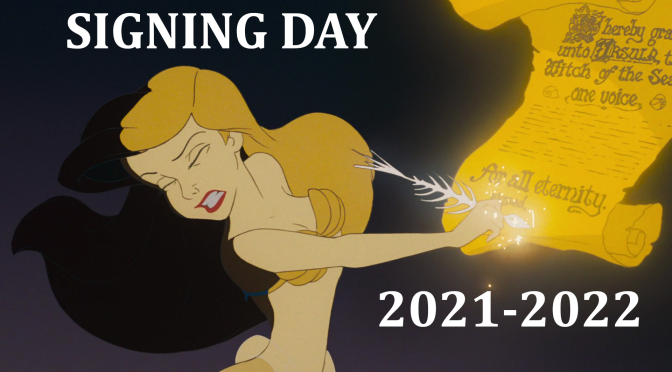 The National Letter of Intent is a document signed by future college athletes confirming their intent to attend and compete for a particular school. Signing the NLI signals the end of the recruiting process—i.e., all other schools must immediately cease recruiting that gymnast. The NLI is accompanied by the athletic aid (scholarship) agreement. Gymnasts can’t sign NLIs if they are not receiving athletic aid.

Wednesday marks the beginning of this year’s signing period, during which schools will finally reveal to us which gymnasts have signed on to join their programs for the 2022 competitive season. The large majority will be unsurprising since most of these gymnasts have been verbally committed to these schools since the womb, but there are always a few pieces of interest (usually regarding who doesn’t sign rather than who does).

So, let’s see what we see. If nothing else, this year will be a little different because typically these signing athletes would be tasked with replacing the routines contributed by seniors during the 2021 season, but with everyone being granted an extra year, that’s not necessarily the case this time. There will be more adding, without as much subtracting (potentially).

Many of the US Olympic hopefuls are planning to start college in the 2022 competitive season, but since a number of them have already signed with their schools during a previous period then deferred to pursue the Olympics, they won’t show up in these announcements. But, we are expecting to hear about McCallum, Eaker, Bowers, Suni Lee, Emily Lee, Aleah Finnegan, and Sloane Blakely among others in this week’s announcements. END_OF_DOCUMENT_TOKEN_TO_BE_REPLACED

My weirdest post title? Probably. Can’t wait to live blog me some friendship.

The 30 athletes from Russia, USA, China, and Japan have been split up into two teams. Each athlete can compete all the apparatuses they want, but only the top 3 scores on each apparatus count for the team score that definitely matters.