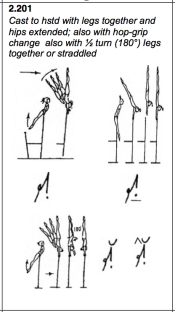 Known as
Cast 1/2
Cast to handstand, half turn

About
The cast to handstand with 1/2 turn is not a particularly common skill in modern elite gymnastics, seen only as an interstitial element when a gymnast finds herself facing the wrong direction and needs to switch in order to get to her next D-value skill. You did a Pak, and you don’t have a Shaposh 1/2, so you need to get facing the other direction to do a toe shoot. You did a Gienger, and now you need to get facing the other direction to dismount. It’s sort of an easily ignored compositional element—like a conjunction of gymnastics—but infuriating because it often incurs more deductions than the skill is worth by finishing past handstand. Also, it’s trash.