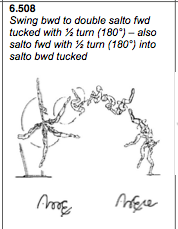 About
For quite a while, this dismount would have been seen as a remnant or curiosity in the code of points that you didn’t know existed. Then, this dismount was upgraded from a D to an E in the 2017 code, around the same time that Huang Huidan brought the general idea of this dismount back to prominence.

The WTC, however, determined that most of the people performing this type of dismount currently—like Fan Yilin and Riley McCusker—aren’t actually performing this dismount, the one with a front tuck 1/2 into back tuck. They are instead said to be performing a 1/2 turn into a double back, which had to be submitted as its own skill, valued at a D.

In a real winner for the code of points, this skill has been named after “Arai (TBC)” for quite some time. Cool story, but her name is Yuka Arai, and she did this dismount at 1994 worlds, and it took me 11 seconds on YouTube to figure that one out.