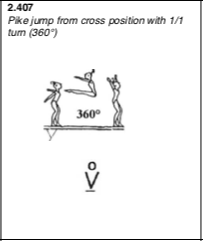 About
The pike jump with a full turn on beam is one of those elements that exists but also doesn’t. No one does it, and not for lack of value. Now at a D rating, the skill would be exceptionally valuable to include in a routine. The race to have D dance elements to include in your beam routine is real—hence the prevalence of all those side jumps.

That it has not caught on in any discernible way tells you that gymnasts find the difficulty and risk not worth it, at least compared to other D dance element possibilities. Though I am surprised it’s not at least a little more frequently attempted.