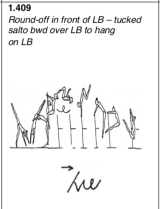 About
Martina Jentsch is more than just part of the 1988 hair parade that was the East German team at the Seoul Olympics. She also has this difficult little monster named after herself after performing it at the 1987 World Championships, and she continued to compete it into 1988. At the 1988 American Cup, there wasn’t enough room allowed for the run-up she needed to compete this mount, so she had to start her bars routine on floor.