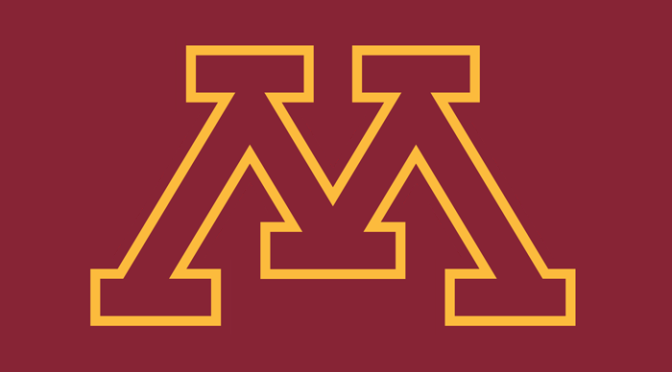 THE 2019 STORY
The 2019 season proved a resounding success for Minnesota. The team endured the pains of a slow-ish January to rise and finish the regular season in 11th place, subsequently advancing to the regional final and giving LSU and Utah a serious fight in what was always going to be a near-impossible task to advance to nationals.

Coming off two weaker seasons post-Mable, the 2019 performance and ultimate 13th-place finish sent the message that Minnesota is back.

Minnesota loses just one postseason routine—the floor from Ung, who sort of alternated with Cutler here and there filling out that lineup—so there’s little replacement work to be done.

INCOMING GYMNASTS
Minnesota brings in a freshman group of four, as well as transfer Maddie Quarles who was at Denver for her first year and projected as a multi-event contributor there before she arrived. Expect to get to know Halle Remlinger as well as part of an incoming group that is largely VT/FX oriented in an effort to pick up those lineups.

2020 PROJECTION
Looking at Minnesota’s 2020 roster, there’s every reason for optimism and little reason for pessimism. All the important scores from last season return, and a couple new routines should liven up the vault and floor lineups so those events become a little more top-10 competitive in the elimination meets.

This Minnesota team should advance to the regional finals again in 2020 and will be among the more compelling spoiler choices for an upset trip to nationals. Though it would be an upset.

Minnesota’s most dramatic improvement from 2018 to 2019 came on vault, where full healthy seasons from Loper and Williams meant it wasn’t just the Ramler show anymore, while Sales and Sonier brought in essential early-lineup scores so the team wasn’t fighting against some random 9.6 from the second spot.

Minnesota will look to build on that improvement for 2020, the most interesting aspect of that project being the potential introduction of Maddie Quarles. Because Quarles didn’t compete for Denver last year, it’s difficult to feel confident projecting anything for her, but she had a good Y1.5 in JO that would make this vault lineup that much more imposing. Halle Remlinger finished 4th on vault at JO Nationals this year, racking up some big numbers along the way as well, and while videos of her vaulting are unfortunately scant (somehow, this 1:22 Flo video of people sitting and then some guy’s ear was not exactly helpful), Remlinger’s JO scores look very lineup-y.

That bolstered collection of 8 vaults (adding in Quaglia who vaulted all last year for scores pretty much equivalent to Sonier’s, so she can also go) gives Minnesota a competitive group that will more often hope to avoid a counting 9.750 from a 1-3 position this year.

Bars was Minnesota’s strongest event in 2019, and I don’t think anyone is going to fight me on that. As for the 2020 lineup, basically no new bars routines are coming in, so don’t be surprised if we end up seeing the same lineup this year as in 2019, which means scoring expectations should be the same. Basically end of analysis?

There was a tendency toward a little 9.7ishness in the first couple spots last year from Quaglia and Willmarth, so if someone new like Remlinger comes through, one of those positions could be in jeopardy. Predominately, what we saw last year was Loper and Sales in the 3-4 spots going mid-9.8s to make up for any 9.7s, and then 9.950s from Ramler and Lu in the last two spots to bring the event total up to nationally competitive territory. So the state of the bars lineup is not the most urgent concern.

The most urgent concern is why Lexy Ramler doesn’t have any 10s.

As on bars, Minnesota has no new beam routines absolutely screaming for positions in the lineup in 2020, so we’re largely looking at the same group as in 2019. That group worked out pretty well. Aside from a truly tragic first-meet performance and a counting fall at Big Tens, Minnesota’s beam was pretty consistently 49.2s and 49.3s last year, and unless you’re a top-4 school that bleeds 49.5s, you take those numbers on beam any day of the week.

Once again, Ramler, Lu, Sales, and Loper will lead the scoring. Ali Sonier was pretty solid in the leadoff position last season (12 for 14) and once Korlin-Downs came back into the lineup in February last year, she went 9-for-9. Other options do exist that should get a little time—Quarles is the most compelling possibility, and we saw a little bit from Higgins, a little bit from Nylin, a little bit from Montgomery last year—but unless these routines are consistently 9.8+ options, there’s not really a need to make drastic changes to the group.

Floor was probably Minnesota’s least impressive event in 2019. The scores were still pretty good—and 13th is certainly not a bad event ranking—but floor was the most likely event to see some lower 9.7s or some 9.6s and ended up a comparative weakness at regionals, when the bigger scores from Williams, Ramler, and Loper in the second half couldn’t save the day. In the quest to be a more compelling upset option for a spot at nationals in 2020, Minnesota will be looking to shore up this lineup with a couple new routines.

As on vault, we don’t really know the state of Quarles’ potential contributions, but she opened with a FTDT in JO and scored well for it, so on paper at least, I’d put that routine in the lineup. Remlinger will be an interesting factor on floor because she’s a big tumbler with elements like a piked full-in, but her JO scores weren’t quite what you would expect for someone of her tumbling ability because of the leaps. Still, if Minnesota can put together a code-smart routine for her, the tumbling is there. Whether that routine comes along may be the difference between improving in 2020 or staying the same.

I’d like to see both of them get opportunities to strengthen the first half of that lineup, because while Minnesota definitely returns enough routines to fill out a floor lineup, it’s unclear right now whether there are enough 9.8s to stay with the big teams.

One thought on “2020 Minnesota Golden Gophers”