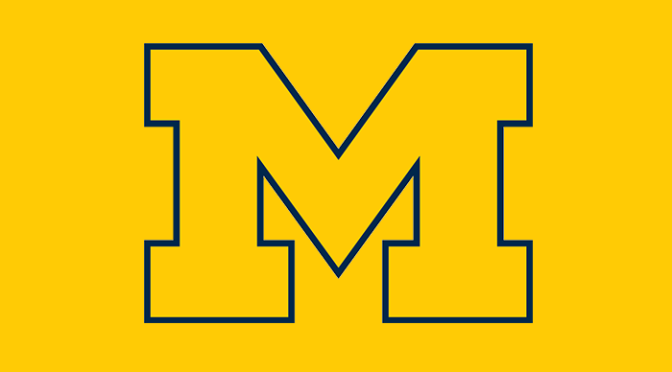 THE 2019 STORY
There’s much for Michigan to be proud of from its 2019 season. The team came back from missing nationals entirely in 2018 to finish 2019 in 5th place, which quietly ranks as Michigan’s best result of the decade. In fact, Michigan hasn’t done better than 5th since Elise Ray was a freshman. You wouldn’t necessarily have picked that coming in to 2019, but it was a historically good finish.

Because Michigan’s senior class last year was only two members, it’s not an overwhelming heap of routines that the team has to replace. Still, they were such essential routines that you can’t automatically assume the ability to plug-and-play new routines that will get the same scores.

INCOMING GYMNASTS
But they should be able to plug-and-play new routines that will get the same scores.

Michigan has brought in two of the nation’s top L10 recruits in Sierra Brooks and Gabby Wilson, and the hope is that Sierra Brooks can be put in all the Olivia Karas spots and Gabby Wilson can be put in all the Emma McLean spots and just keep on trucking. They have the talent to do that job, and along with Nicoletta Koulos, should keep the scoring pace up and improve the team’s lineup depth overall.

2020 PROJECTION
Michigan looks like it has effectively and exactly restocked the lineups from last season, so for the most part, expectations for 2020 should be equivalent to the 2019 results. The team has perhaps a few more options and would be better able to withstand an injury than last season, but mostly the plan is to draw a straight horizontal line from 2019 to 2020.

And that’s not a bad thing. Michigan should easily be a top-10 team, is among the favorites to advance to nationals at this point, and would figure as a compelling spoiler choice should the nationals draw do some favors this time around.

On no event is the basic “Karas, McLean OUT; Brooks, Wilson IN” dynamic clearer than on vault where…well, there’s your lineup. Brooks and Wilson both bring big amplitude 1.5s that will have 9.9 potential as long as the landing control is there. They’re locks for a lineup that will intend to bring five 10.0 starts to the table, with those two joining Natalie Wojcik and Abby Brenner with their 1.5s and Anne Maxim with her Tsuk 1/2.

Initial expectations are that Brooks and Wilson will show similar scoring potential to the vaults they’re replacing in a lineup that stays steady in 2020. Unless Mission Natalie Wojcik 10 starts getting her actual 10s as warranted (unlike last year when we all got so pissy about it that they finally gave her a single 10 for her 85th-best vault of the season). Then, the scores might go up a little. Otherwise same.

The final position in the lineup, the leadoff full, is a your-guess-is-as-good-as-mine situation. Mariani and Koulos competed at the exhibition quad meet (Mariani in the lineup, Koulos in exhibition), and Hesikell, Osman, and Funk all showed vaults last season, so we’ll see. There will be someone who can put up a weekly leadoff 9.775 that gets dropped.

Michigan was a better team on bars last season than that 10th-place position would suggest, and of any event, bars is the one where I see the most opportunity for improvement rather than just keeping pace with last year.

The lineup loses Karas but gains a fantastic routine from Sierra Brooks and another very reasonable possibility from Gabby Wilson (as well as the return of Maggie O’Hara from injury), so the collection is getting a little deeper and could add a smidge or three to its NQS from last year.

Mariani returns the #3 score on bars from last year, so among the second tier of lineup contenders—beyond obvious routines from Wojcik, Brooks, and Brenner and a probably obvious one from Wilson—I put her highest on the list. Then with Maxim, Farley, Heiskell, and O’Hara, all of whom competed last year, and Koulos who brings an equivalent-level routine, Michigan has some solid options to play around with to find the best possible early-lineup 9.825.

Michigan actually returns its three best scores from last year’s beam lineup in Wojcik, Funk, and Farley, which provides a solid foundation to work from in adorning the lineup with ornaments like Sierra Brooks’ routine. Brooks has a 3 series and a double tuck and is poised to once again make up for the loss of Karas’s beam score and keep things (at minimum) steady compared to last season.

A comfortable supply of choices exists for the remaining spots. Beam is Gabby Wilson’s least comfortable event, so if we don’t see her on one of the apparatuses, this is it. Although she does have big amplitude and will be a viable option. In terms of options, I’d most like to see Nicoletta Koulos make it into the lineup because she has the best form of any of the borderline contenders, returning or new, but she’s going to have to prove some consistency in order to break into the lineup ahead of reasonable 9.800 options that competed last year like Mariani, Osman, and O’Hara, all of whom could very well get the job done.

Floor might be the best event for both Wilson and Brooks. (It’s definitely the best event for Wilson, Brooks is in a fight with her bars routine.) Expect those two to link arms with Natalie Wojcik to create a very 9.9-able back half of Michigan’s floor lineup. Brenner will return as well as part of the requisite four obvious routines in this lineup before we start dealing with possibilities for the first two spots. They’re going to be the full-in quadruplets this season, which is a little difficulty increase compared to last season.

One aspect accounting for Michigan’s lower ranking on floor than on vault or beam last season was some uncertainty or 9.7ishness in the early spots, and there’s not necessarily anyone swooping in to change that in 2020. Osman came through with strong scores occasionally in 2019, so she’ll be a default selection for the early part of that lineup, but I’d expect to see some experimentation with most of the rest of the roster to see who proves the most realistic 9.800 to put up or if someone unexpected comes through to bump up the lineup.