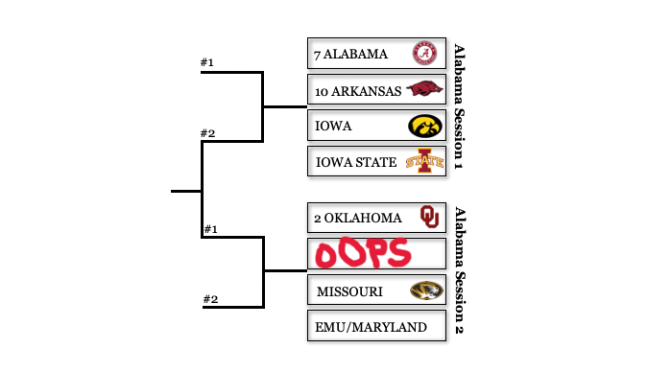 The big news of the day is Auburn’s withdrawal from regionals due to COVID issues, ending Auburn’s season and rendering moot the discussion of the very important Auburn/Missouri clash from yesterday‘s preview.

This means Oklahoma and Missouri will now have to defeat only the winner of the Eastern Michigan/Maryland play-in in order to advance to the regional final. It also makes the two semifinals at this site even more comically lopsided than they were before as Alabama, Arkansas, Iowa, and Iowa State all still have to be in the other semifinal together.

…but I’m sure if you gave Iowa the choice, they would be like, “Yes, please, yes, we will somehow manage the extreme burden of competing at a different time and starting on a different event in order to be in that session instead.”

Also, having a play-in at this site is now exceptionally hilarious as a concept since there’s just going to be an open spot in that semifinal. “Hi, we would rather have nothing than you. Go home now.”

Anyway, what were we actually talking about today? Ah yes chocolate.

Which top eight teams are in danger of not advancing to nationals. If the performances of the top teams from conference championships taught us anything, it’s that…sort of everyone is in danger. End of post.

Assuming things end up going to plan in the semifinals and no one gets Georgia’d, Florida, Minnesota, and Denver will all walk into the regional final with only two teams able to make nationals.

Let’s start with Florida, the clearest favorite to make it out of this regional. Still, Florida does have to put that SEC Championship performance away in order to advance. Both Minnesota and Denver have NQSs this season far higher than Florida’s score from that meet. They would view a 196.975 as beatable child’s play in a regional final.

Trinity Thomas adding back more events in the weeks since SECs would obviously help a ton, but it’s worth noting that Florida’s biggest issue at SECs was bars, the one event Thomas ended up competing. Florida needs to resolve whether Baumann is the actual right choice for the bars lineup or, after two straight falls, whether the delightfulness of the story of her finally getting into the bars lineup is overshadowing the actual best six. Florida will also need to determine what’s up with Payton Richards after her three-fall performance at SECs. Aberration or thing? That issue is most significant on vault where you have to KNOW whether she can actually hit a Y1.5 now that we’re in an elimination context.

If I’m Florida, I put up all the necessary Baumann and Richards routines in the semifinal (a session where a repeat of SECs would still advance comfortably), and then if they don’t have good routines, they’re out for the final. The biggest benefit of the cushy semifinal draws the top teams have is that they basically get another experimentation meet the day before things get real.

But as long as Florida can resolve those issues, it should be smooth sailing to nationals. Basically, I’m just wasting a lot of time on Florida because when it gets to the presumed Minnesota/Denver clash for the second advancing spot, it’s sort of…your guess is as good as mine? Shrug? 50/50? These teams are so close that it’s going to be whoever sticks more on the day and there’s no sensibly predicting one or the other.

I am, however, eager to see how Denver’s lineups shape up. At the conference championship, Denver was without Rylie Mundell and Alexis Vasquez—particularly significant because I would characterize Denver’s two biggest disadvantages right now compared to Minnesota as 1) a lack of Yurchenko 1.5s and 2) Lexy Ramler. Mundell can add another 1.5 to the vault lineup to keep Denver closer there—even though the clearest edge either team has on any event is Minnesota’s greater number of Y1.5s—and Vasquez can score like Lexy Ramler on beam, potentially blunting another of Minnesota’s juiciest advantages. If they’re back in the lineups.

With people like Ramler and Lynnzee Brown trading 9.950s, so much of this will come down to early-order competitors. It’s interesting that one of Denver’s classic issues has been a lack of depth, with a couple 9.750s peppering the beginning of lineups. This year, however, that applies much more to Minnesota, which hasto put up a couple “we definitely want to drop this” gymnasts in the first or second spots. When it comes to trying to beat Denver, Minnesota is not going to be able to afford that “bars fall in the 4th spot that means you have to count a leadoff 9.750” because it’s just too close.

UCLA, What Are You About?

The based-on-everything expectation is that Michigan, Cal, BYU, and UCLA will all advance to the regional final in West Virginia. But then what happens?

We definitely need a score comparison to clarify some of the issues at play.

Michigan is the weakest-ranked team in this group on floor, but one of the best arguments in Michigan’s favor is that “what if floor goes poorly?” already happened at Big Tens and the team still got 197.425, a score that I think will be high enough to make nationals out of this group. BYU and UCLA have not scored that high all season.

Nor has either scored as high as Cal’s 197.375 from Pac-12s. Cal has been extremely consistent in its road performances this season. You know you’re going to get that low-mid 197 from them, which should be enough here. We haven’t seen the other teams show mid-197 gymnastics at any point this season.

But an additional issue illustrated here is that if UCLA actually figures out beam, this thing could get close. Exactly that would have happened at Pac-12s if UCLA had hit beam, where a 9.850 from Sakti would have seen UCLA squeak ahead of Cal in the final standings. Now, that equivalence is also reliant on circumstances playing out exactly as they did, with Cal having semi-meh vault and beam while UCLA gets the scores and routines it got again (are you getting that stick from Wright every time?), but it’s within the believable realm. And if Michigan has even a minor break, Michigan would be right there with them around the same scores.

For BYU, the scoring comparison shows that there’s not one single event the team can lean on to stake its claim to competitiveness in this group, the way UCLA has a couple apparatuses where it ranks in the top two. BYU has been very steadily 196.9 recently and would basically need to do that again and then hope the other teams have their little checks and breaks to come down ever so slightly into the 196s.

The withdrawal of Auburn probably doesn’t alter expectations for the regional final too much here because Auburn would not have been expected to end up in the top two. A victory would have been making their seeding and advancing to the regional final.

Like Florida, Oklahoma is heavily favored to advance from this regional but does have some issues to work out to make sure that is definitely definite. Oklahoma’s 197.1 from the Big 12 Championship is an attainable score for both Alabama and Arkansas and almost wasn’t enough to beat Iowa State in that very meet. It can’t be repeated in an elimination context.

Most of Oklahoma’s potential to improve on the scores of the recent couple meets will be based on who can get back into lineups at the very last second. Getting Audrey Davis on more events would be a thing—particularly on vault where she would provide a sixth countable score in case someone falls, which happened last time. The primary vulnerability in recent results, however, has been floor, where Oklahoma has simply not been able to use anywhere near the ideal six you would come up with when glancing at this roster. Getting Trautman back on FX may be too much to ask because it has been so, so long, but perhaps getting Ragan Smith back in there would do critical work in eliminating a possible 9.6 from having to count.

It’s all about the depth. The more medium-backup routines you have in there, the more likely a few of them are going to have to count, and then oops you lost to Denver.

Much of the focus of this regional has been on the Alabama semifinal because it’s such a strong group, but once we get to the final, there’s probably only one spot left for any of those teams to join Oklahoma at nationals. If Alabama is able to recreate the performance we saw at SECs, the fight might not be that interesting after all—suddenly rendering this terror regional among the most straightforward once we get to Saturday.

But that is incumbent upon Alabama continuing to perform at that level. And we’ve seen that…not happen this season as well. We’ve seen the 10.0 start parade go awry on vault. We’ve seen the beam falls. We’ve seen 9.7-level floor work to start that rotation. None of that is going to cut it, either in the semifinal or the final. Arkansas’s floor rotation would not let that stand, and pre-SECs, this Alabama vs. Arkansas issue would have been considered a much closer prospect. It could every well go back to that place.

But it’s up to Alabama whether it does. Which Alabama shows up is the single most significant factor at this regional.

Is This a Trick?

This is the regional the top seeds all really wanted and presents the most straightforward elimination arrangement right through the regional final. But is that actually going to happen?

I mean probably? LSU and Utah have a significant scoring advantage over everyone else here, save for the slight blip on bars where Arizona State ranks ahead of Utah, and if recent meets are any indication, both top seeds should sail through. Which is the jinx of all jinxes, I’m sure.

But it would take errors. Things would have to go wrong because both LSU and Utah have multi-event buffers over the rest of the teams, buffers that should make up for little issues or some events not being at their very best.