A few notes on what transpired at the first day of men’s selection competition yesterday, as we prepare for the final day of the selection process tomorrow at 3:30pm MT.

1) Mikulak and Moldauer are way ahead of everyone else. I wouldn’t use the scores, particularly for those two, as any kind of indication of their real-life scoring potential since they were high, occasionally to a comical degree. But compared to the rest of the selection field, they really are that far ahead of their teammates.

2) Marvin Kimble did not make his case. We’ve been waiting to see what level of competitiveness Kimble would show after missing nationals. His performances on the three events he competed on the first day were not yet at selection standard, particularly his critical HB routine where he got destroyed for an E score in the 6s—despite not falling—because of all the crazy form and late finishing positions.

Now, I’m still somewhat disposed to consider Kimble for the worlds team because of how disastrous everyone was on HB and what he potentially could score there. Even with a weak performance, his 12.950 wasn’t too different from the rest of the squad. That’s how dire things are on HB. Give me a possible 14 with the risk of a 12 over a guaranteed 13.2. I acknowledge, however, that a repeat of his HB performance on day 2 should eliminate Kimble from contention. But, if he manages a 14+…

Also hurting Kimble was the lowish score on rings, an event he would have been counted on to contribute to this team. He needed a 14 there. Right now, the US is left looking for a third good rings score, and that alters some of the selection dynamics. If only you had someone like Donnell Whittenburg competing…oh wait. END_OF_DOCUMENT_TOKEN_TO_BE_REPLACED 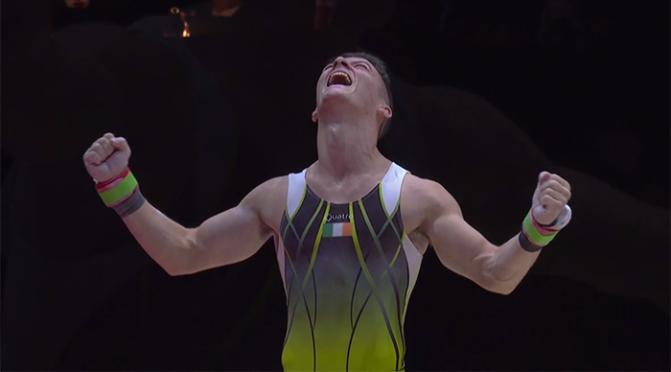 The host nation couldn’t have started the final day of competition any better as Dom Cunningham pulled out the upset victory on floor exercise to take gold ahead of a number of his higher-D colleagues.

Cunningham’s 6.1 D may have seemed to put him at a disadvantage, but his routine was noticeably free of the major OOB errors that befell the medal favorites and their 6.4 Ds. Top qualifier Artem Dolgopyat went out with both feet on his first pass, a 0.3 neutral deduction that took him down to second place, with Nikita Nagornyy suffering the exact same result on his opening triple back, putting him in 4th place. Both finished less than three tenths behind Cunningham.

Artur Dalaloyan did not go OOB but did have a major stumble back on a front double pike that gave him the lowest E score of the top four finishers, nonetheless still good enough for bronze based on difficulty and lack-of-OOB-ness.

Alex Shatilov went through cleanly but wasn’t quite as crisp in the landings to take fifth place, which obviously should have been first place because Shatilov. He and Nguyen had to settle for 5th and 6th, while the two who fell, Zapata and Onder, occupied the bottom positions.

We can officially crown our new king of pommel horse as Rhys McClenaghan hit his super-difficult routine for 15.300 to pretty much bury the rest of the field, deservedly receiving both the highest D score and highest E score of the final. It wasn’t close.

The big surprise of the final was the mistake from Max Whitlock, who didn’t so much fall at first, just lost his rhythm and had to stand atop the pommel horse looking down at it like a stern father who isn’t mad at the pommel horse, just disappointed.

“Sigh. I just thought we taught you better than that.”

Also I’m pretty sure there’s a statue of that exact image in a Florentine piazza somewhere. END_OF_DOCUMENT_TOKEN_TO_BE_REPLACED

Well…we knew a team would count three falls on high bar in the final. We just didn’t necessarily have the right team in mind.

The ultimate standings of the men’s European final informing us that Russia won gold and Great Britain took silver may look like a normal, ho-hum result, exactly as expected coming into the championship, but the sack of crazy that was this final took us on many strange and mind-altering journeys before arriving at its anticipated ending.

Through five events, a Russian performance squarely in the OK-not-great category had opened the door to a somewhat unanticipated challenge from the Brits. Now, there were still highlights from Russia on those first five events, mostly involving Dalaloyan and Belvavskiy, but a seat drop (bad kind) from Nagornyy on floor, Lankin getting caught in a dust devil on his rings dismount for some reason, and Nagornyy having an intimate moment with the left rail on PBars took the Russians somewhat off track. END_OF_DOCUMENT_TOKEN_TO_BE_REPLACED OK, so everything is terrible. Don’t worry about it.

After the death-by-a-thousand-pokes that is men’s qualifying day, the standings are official and we have learned that the odd team out is our dear Netherlands, finishing 9th. There were always going to be some potential stumbling blocks for this team, but a disastrous floor rotation would not have been super high on that list. Floor? That was supposed to be the good one. Instead, losing multiple points against its expected scores on floor is ultimately what took the Netherlands down, not just out of the medal conversation but out of the team final entirely. The Dutch men are basically the German women of this Euros.

In better news for Russia, it turns out they’re a lot better than everyone else. Like a lot. Russia qualified in first place by SEVEN POINTS despite being exactly as emotionally troubling on high bar as we all feared and expected. Russia ended up in 9th place on HB but won every other event, several by a significant margin, so it basically didn’t matter. We knew Russia was the best team here. We didn’t know Russia was the best team here by that much.

Great Britain did not have a perfect day en route to its second-place qualifying position— with a couple misses on vault and problems for Whitlock on floor—but even with a fully hit competition, it’s hard to see GB challenging the Russia we saw today. As things stand now, it appears Russia would need to have a super-duper-meltdown in the team final for Great Britain to take gold (not even just a regular Russia meltdown because that happened today on HB, and it was fine).

The Brits will retain silver-favorite status going into the team final since their qualification performance was still clearly better than anyone else’s, with the expectation that vault will improve in the final as well to boost the totals a little. END_OF_DOCUMENT_TOKEN_TO_BE_REPLACED

In just over one week’s time, you might find yourself watching the men compete at US nationals, simultaneously developing the sudden need to have extreme, loud, and uncompromising opinions about who should go to worlds based on the exactly three routines you just watched.

It’s an important part of the gymnerd experience.

To supplement these extreme opinions, here’s a little refresher on the major players and what their whole deals are right now.

We’ll start with Sam Mikulak (you know him!), who will be returning to his traditional status as all-around favorite at nationals this year. Last year, Mikulak was attempting to come back from his Achilles tendon transforming into the tentacles of a sadistic octopus and therefore competed only two events at nationals, horse and high bar. He was nonetheless named to the worlds team to compete high bar, but not without a little Simone-Morgan about whether he had truly earned a spot on the team with his performances in the lead-up to worlds.

This year, there should be no such controversy. Mikulak is back to competing the all-around and reminding everyone that the reason he gets named to every team every year is that he’s better than the other choices, especially on key events to the US team.

There’s always the worry about inconsistency, because Sam will fall sometimes, but his all-around scoring potential and strengths are far too valuable to the US team to be compromised by falls here and there. Mikulak went 86 at both days of Winter Cup to win the competition in a breeze, and would have recorded another 86 at the national qualifier had he chosen to compete vault. An 86 is the score this quad (all necessary caveats about domestic scoring included).

Best placed to challenge Mikulak will be exemplar of all that is good and right in men’s gymnastics, Yul Moldauer. Moldauer put himself directly in the mix with his American Cup score of 85.964, and seeing him win his second straight national championship would not be a surprise at all. The playbook on Moldauer is the same as it has been. He doesn’t have the huge, event-final type D scores, but it doesn’t matter so much because of his execution. END_OF_DOCUMENT_TOKEN_TO_BE_REPLACED

For the next…somewhere in the vicinity of seven days, it’s going to be all men’s gymnastics, all the time. Let me be your guide on this journey. I plan on getting you obsessed. And by obsessed, I mean drunk. On abs. Also liquor.

To begin, a preview of this weekend’s European Championships.

Mimicking the outlook for the women’s competition, Russia will arrive as the favorite to win the team title, with the caveat of…how Russian are you going to be in the mind area? Can you keep it together? The Russian women exceeded expectations in that regard in their team final. Now, can the guys do the same?

The team of Belyavskiy, Nagornyy, Dalaloyan, Kuksenkov, and Lankin is well-balanced, as much as you can get on a five-person team that’s expected to deliver 18 international-class routines. Belyavskiy and Nagornyy can provide routines on any event they’re asked to do, Lankin and Dalaloyan will bring the GRRR POWER STUFF routines, and Kuksenkov will hopefully keep everything in order to support Belyavskiy on the potential stumbling blocks, pommel horse and high bar. The team members should each be able to play to their strengths, and this group shouldn’t have many weaknesses, except for that one…

High bar. We haven’t yet recovered from Belyavskiy’s and Nagornyy’s Pompeii recreations in the Montreal AA final, and at this meet, both will be expected to hit multiple HB routines for Russia, which will need to get through that event without a meltdown. If you sleep through the beginning of the men’s team final, I won’t blame you, but be sure to wake up at the end to watch Russia on high bar. And bring a couch to hide behind. END_OF_DOCUMENT_TOKEN_TO_BE_REPLACED