One week from today, the US national championships will already be underway, and you will already be losing your mind about some such situation. Gymternet. So by way of an initial toe-dip into the world of previewing this competition, let’s get into the rosters and start lists, which have already been released.

In all, 17 women will compete in the senior field at nationals. This marks the smallest senior field of the quad so far, but it’s up from those 2013 and 2014 national championships when just 13 women competed in the seniors, which was an unnecessarily small field.

Of the group that competed at Classic, Gilstrap, Hollingsworth, Jeffrey, and Vides did not make the cut for nationals, while Malabuyo and Adams withdrew due to injury.

The entirety of the Pan Am Games team is, indeed, slated to compete at nationals. We were informed at Classic that this would be the case, though a significant consideration will be the allowance we should have for those athletes downgrading or taking it easy coming off a long, major competition. We don’t necessarily need to see two days of full difficulty, especially from those who competed in the AA final and multiple event finals (or from those who have concussions). Though at the same time, I imagine it will be somewhat hard not to go all out with such an evenly matched and competitive field heading ever closer to worlds selection.

The IEC minutes from May tell us that the national teams for both seniors and juniors will be expanding from a minimum of 6 to a definite 10, which is a change from what was initially published on the 2019 qualification chart. USAG things. It’s quite interesting (where’s that money coming from, Bankruptcy Magoo?) and indicates that more athletes will be invited to the selection camp this year than we saw last year. In 2018, the top 8 seniors in the AA were immediately named to the national team following championships, and 9 in total were invited to the worlds selection camp—Ragan Smith, Alyona Shchennikova, and Jordan Chiles were added to the group for camp, while Jade Carey and Trinity Thomas did not attend because they weren’t going for worlds. END_OF_DOCUMENT_TOKEN_TO_BE_REPLACED

European Games has the day off today, so I’m just coming in with a quick recap of the women’s team/AA competition at juniors worlds—there’s not a lot to say since WE COULDN’T SEE IT. Originating and organizing this big event and then making sure it’s pointless and impossible to care about…the gymnastics way. Girl, what are we even doing here? Live stream or it didn’t happen.

Especially because this one looked really exciting. Cool, fun mystery.

In the women’s team competition (and all-around), it was a glorious coronation for this generation of Russian juniors that—between Jesolo and junior worlds—has now racked up two victories over the US juniors in 2019 with its trio of future obsession-worthy stars Vladislava Urazova, Elena Gerasimova, and Viktoria Listunova. Valentina, don’t screw this up for us.

Whenever the US women lose a competition, it’s a headline (especially finishing 3rd as they did here), but finishing behind Russia did not come as much of a surprise since the Russian team started with a clear difficulty edge on the US and China and therefore held its fate in its own hands. Among the counting scores here (3-3-2 team format), Russia had a D-score advantage of 1.4 over both the US and China, meaning that Russia was always going to have to make errors to become vulnerable to anyone else. What’s truly newsworthy about this Russian team is that…they didn’t. Despite being all Russian and whatnot.

I had definitely tempered expectations with “OK, but when Russia falls three times on beam…” thoughts, but they didn’t have three falls on beam. They had maybe one we think? And were able to drop it. Russia also recorded the top 3 scores on bars and 3 of the top 4 scores on floor. It was a pretty dominant performance. END_OF_DOCUMENT_TOKEN_TO_BE_REPLACED

A. The weekend ahead

No world cup events to watch this weekend, but I am looking forward to see what transpires at the FIT Challenge in Ghent. All the main Belgians will be there, alongside what (at least per the nominative rosters) should be a strong crop of Australians, several of the top-tier Dutch, and pretty much all the healthy gymnasts in the entire country of Romania. With those teams together, this should be a seriously informative preview of the race for the last couple Olympic team spots.

The weekend also brings another US elite qualifier, this one at Auburn (in Washington, not Alabama). There’s one session for optionals on Friday evening, and then three more on Saturday, so keep an eye on those results if you’re fascinated. At least weekend’s Parkettes qualifier, eight more juniors got their qualifying scores to advance to Classic (led by Frazier The Younger). No seniors got their AA scores, with Victoria Nguyen just missing out on the requisite number, but Abigael Vides of WCC did get a three-event score for vault, beam, and floor.

We’ve had some fairly significant team commitment news come over the last couple days, most exciting to me is word that Italy’s Clara Colombo is heading to Nebraska. Colombo is a viable all-arounder who is particularly adept on bars and has come closest to making Italian teams in the past because of her ability to go over 13 on UB.

Getting the second-tier Italian elites who do well in Serie A but never make the big teams into NCAA gymnastics is an all-time dream, though the language requirements typically seem an insurmountable issue. If this is the start of a trend, I’ll be over the moon. It’s a match made in face glitter.

Other elites heading to college: Laney Madsen has announced her commitment to UCLA. We don’t yet know what season (it’s still a verbal commitment not an NLI signing, which the 2019-2020ers did last November), but UCLA is hard at work trying to establish what’s going to happen when the Ross/Kocian/Hano class goes, with Chiles and Moors already set to start in that critical 2021 season. END_OF_DOCUMENT_TOKEN_TO_BE_REPLACED 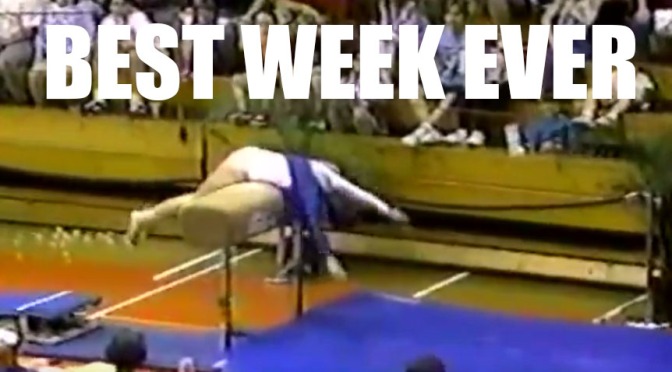 At the top of the playbill, the GymQuarters Mardi Gras Beads and Whatever Invitational brings us a comparison we almost never get in a non-postseason context—Utah against LSU. That comparison is becoming particularly relevant this season as Utah and LSU spend more and more time entrenched at #4 and #5, rankings that will be assigned to the same regional site in the new postseason seeding format.

Because Utah has shown the more consistent performances thus far with those weekly 197 victories, winning this meet becomes more important for LSU—a team that has had its share of dramas and losses (admittedly with a more difficult schedule) and is coming off a quite lackluster performance against Kentucky. In addition to whatever sentimental hogwash and confidence concerns you might want to imbue the current situation with, pragmatically, LSU has fewer usable scores than Utah right now (only one worthwhile road total) and needs to take this opportunity of a road meet to get a mid-197.

At the same time, LSU’s desire for victory may be tempered by some difficult lineup decisions since this is a two-meet weekend. On the one hand, it’s preparation for the back-to-back days of regional competition. On the other hand, this roster has a number of fragile athletes you wouldn’t necessarily want to push on the leg events for a two-meet weekend right now. Do you hold them back in one meet or the other? Balancing the powerful desire to get confidence back right away by going all out and trying to beat a higher-ranked team like Utah with the patient knowledge that it’s still the regular season and you’re going to make regionals with a fine seeding regardless is a challenge.

Utah will have to manage some of the same lineup considerations for its two-meet weekend with Skinner and Tessen and Reinstadtler all having faced participation limitations in the early going, but will also want to bring out the fireworks for this one. This is the first real big-money meet of Utah’s season—a top-ranked opponent, a podium meet—and one that ushers in the far more difficult portion of Utah’s schedule. Monday’s meet against Stanford is Utah’s last remaining competition without a top-10 opponent. Other than that, it’s LSU and UCLA and Georgia and Michigan and Pac-12s. Difficult asks, but also serious opportunities to move out of that solid-but-not-nationals-level rut of lower 197s.  END_OF_DOCUMENT_TOKEN_TO_BE_REPLACED

No, noteworthy elite competition for 2019 doesn’t really get underway for another week with Elite Canada, the Reykjavik Games, and the Buckeye Kristal Uzelac elite qualifier, but we sure do have a lot of roster news to keep us warm until then.

Stuttgart has announced that it is the champion of the AA world cup series this year, getting both Simone Biles and Aliya Mustafina to headline its field that also includes Seitz and Schäfer. American Cup is like, “You win this round, Germany…”

We’re also only about a month away from the 2nd of 8 competitions in the apparatus world cup Olympic qualification series (Melbourne, February 21-24), and we now have the list of competitors, one that is notably rather sparse on the women’s side. Leading the field is the comeback of Vanessa Ferrari, who’s going to be perfectly suited to attempt the apparatus route and depending on her current level, has a series shot at garnering a ton of floor points here. A couple other countries are all in, no regrets with their rosters, but not too many. Of course Australia is bringing its best available competitors, and China too is sending a strong group featuring Fan Yilin. (Recall that Fan fell in the final at Cottbus, so she doesn’t have a useful result from the first stop.)

But beyond that, most of the far-away European countries are taking a pass on this one on the women’s side, providing an opportunity for some unexpected people to get loads and loads of points. The same is not true on the men’s side, where nations like the Netherlands, France, and Great Britain are slated to send some of their most likely qualifiers to try to snatch a good result early in the process. You can check in on the current Olympic qualification standings after one event here.

The US women are back at it for another national team camp.

Back at it for January camp! pic.twitter.com/IfP4dzXOQs

The roster here is large, as is pretty typical of the January camp, with all the members of the national team participating, along with other invitees. Not on the roster among the major senior players are Adeline Kenlin, Olivia Dunne, Tori Tatum, Audrey Davis, and Maile O’Keefe. END_OF_DOCUMENT_TOKEN_TO_BE_REPLACED