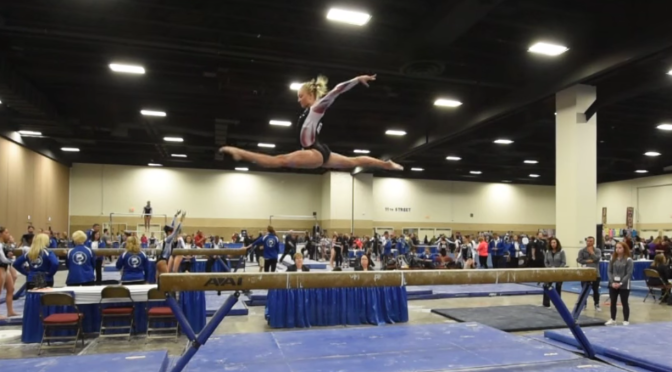 For the first time in recorded history, Nebraska doesn’t really lack routines among its returning corps, which is why the Huskers rank reasonably well based on retained routines from last year. They could quasi-legitimately fill out lineups using only sophomores-seniors. It wouldn’t be great, but it would be a team. The real question for 2017 will be—two years after losing DeZiel, a year after losing Blanske—does Nebraska have enough 9.9s to stay competitive for a spot at nationals?

In that regard, the Huskers will be looking to star freshman and Senior E national champion Taylor Houchin to crush the all-around into a tiny cube.

Let’s begin with vault. As a group, this freshman class is not so much with the vault. Couple that with a dearth of 10.0 SVs among the returning vaulters, and Houchin’s Yurchenko 1.5 becomes all the more important in the quest to keep pace with last year’s scores.

That will be the best vault on the roster and will need to slide right  into the Blanske role as soon as possible. On bars and beam, Houchin is served well by her extension and precision. It’s not hard to envision both of those sets turning into college routines with very few built-in deductions. Check out the finishing position on the second giant full in this one. Mwah!

Of course, dismounting with a double pike isn’t ideal. We don’t usually see top bars scores go to routines with double pike dismounts, so we’ll have to watch if Nebraska tries to make a change there or simply focuses on cleanliness and dares the judges to deal with it, in the Danusia Francis style. Also, get in the beam lineup.

Floor has tended to be the lowest score for Houchin, though that’s relative. It’s not a big routine, but it does feature a perfectly solid double pike and clean and comfortable twisting elements that will be useful. The job of bringing the big on floor may simply be down to somehow getting Ashley Lambert healthy for more than two consecutive seconds. Possible?

Houchin has the highest profile of the four freshmen, and once we get to the other three members of the class, this becomes a task shrouded in mystery and random YouTube videos from years ago.

Sierra Hassel has been injured approximately forever, making it difficult to know exactly what she’ll bring to the team, but I do think she has the potential to be Nebraska’s diamond in the–diamond in the–diamond in the rough. Back in the 1850s, Hassel showed very strong walkover and side aerial elements on beam and all the makings of a strong NCAA score. That routine is 2.5 years old but you know, could absolutely be a thing.

Bars was an interesting one for Hassel because she performed strong individual elements (Jaeger, DLO) but completely lost it on the handstands and never received good scores because of those damn handstands. We’ll see where that routine can go in college because it’s not without some solid pieces.

As for Alexa Clark, she seems most likely to contend for spots on beam and floor. (On vault, I haven’t seen anything more than a layout, and in spite of a viable gienger, bars usually ends up in the 8s.) Her beam work is deliberate and maybe partially terrified, but that happens. It has been her best event in 2016 by quite a margin.

Staying tonally consistent with her classmates, Clark is also a twisty on floor, not a double-saltoy, going the back-2.5 and back-2/1 route. It’s the twister’s equivalent of a traditional JO double pike/double tuck routine.  While E passes are not necessary, it’s worth noting that I haven’t seen any from the Nebraska freshmen. This 2017 Nebraska team will absolutely not be able to play Blinded By Difficulty. It has to be clean, clean, clean.

The fourth member of the class is walk-on Laura Oh, who shows some of the expected elements on beam and floor but is the least likely to challenge for any lineups.

It should be noted that Nebraska also brings in transfer Abbie Epperson from Maryland this year. Next to Houchin, she may be Nebraska’s most important new contributor, having already shown an ability to go into the 9.8s on each event over the last two seasons. Miracle of miracles, Epperson does have an E pass on floor—but it’s a front 2/1, so she also fits in on Team Twisty. Phew. On vault, Epperson peaked out at 9.900 for her Yurchenko full (when it was still worth 10.0), and she recorded a 9.840 RQS on bars last year for her jaeger, bail, DLO routine. Epperson’s presence makes the idea of coming up with lineups that don’t include any 9.7s a lot less horrifying.

Nebraska also ended up red-shirting three of last year’s six freshman: Shows, Kuo, and Chung. Shows appears to be limited to just bars and beam these days, but she did exhibition last year and has shown an amplitude of a tkatchev in her JO days.