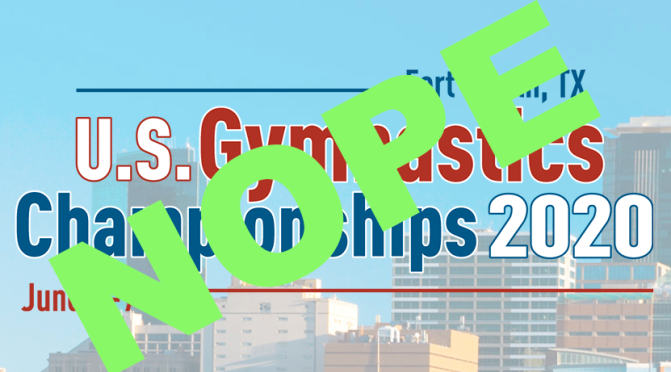 A. USA is canceled

USAG announced today that the 2020 editions of Classic and Nationals are officially off and that we all just have to reset for the 2021 editions instead. Sigh. Previously, the party line had been that these events were postponed and that USAG would reassess possibilities for holding them in late summer or fall, but that always seemed like a pipe dream. You can’t really set a date (or venue) for nationals if you can’t set a date for athletes to return to their gyms first.

In a statement, USAG said, “Listen up, pee heads, we have literally no reason to try to organize these meets without crowds because then we can’t charge 8 million gold bars per ticket—or, I mean, after consulting with public health experts and in an effort to protect of our community and the wider world, we will not hold nationals this year.”

This follows what is becoming a pretty familiar pattern where the money sports desperately try to bend themselves into pretzels to get going again this summer, while the no-money sports recognize that they do not have the clout or incentive to make that happen and are refocusing on 2021.

Because it’s about the athletes.

B. Everyone else, also canceled

Since last we spoke re: things and happening, further details emerged about the complaints against Maggie Haney, largely revealing that she’s not just mean but also stupid (I mean, the period stuff, come on). The stories in this article are harrowing to say the least, and I would like to see an official response from those coaches who were rolling around Facebook a couple days ago being like, “IT’S JUST COACHING TOUGHEN UP DON’T QUIT JUHFLRFRRRFFRRR.”

Proposal of the day: This should be the biggest complaint you have about a coach

Sydney Freidin would also like you to know that this is far from a one-coach problem.

The fact that nothing exists anymore has not stopped the usual revolving door of NCAA gymnasts, so here’s a rundown of the latest moves.

Mostly, it’s about Nebraska. So far this offseason, we’ve learned that Abby Johnston is transferring to Arkansas, Kaylee Quinn is transferring to Alabama, and that Ady De Jesus has been dismissed from the team for an undisclosed rule violation. Put that together with the departure of the 2020 seniors Taylor Houchin and Sierra Hassel, and we’re looking at a very different Nebraska squad for…the next time there might be a season. They’ll be relying on former junior elite Kinsey Davis and Canadian elite Chloe Lorange to do a lot right away.

In other developments, Hunter Dula has taken a medical retirement at Utah, but Utah also announced that Alani Sabado is joining a year early. Look how that worked out. Sabado was 3rd AA at JO nationals last year in the Junior E division and therefore will basically have never competed as a senior before she starts at Utah.

Our first members of LIU’s inaugural team are also coming in, the name of the group so far being former junior elite Cael Bixler. Bixler was a fetus-verbal to Oklahoma way back in the day, but that never materialized and she didn’t end up signing with anyone at all last November. Exactly the kind of gymnast you’re looking for with a new program. It’s basically a support group for people who were passed over by their dream schools.

Canadian L10 Alana Ricketts is also slated to join LIU’s first class, an athlete who looks like she should have competitive possibilities on vault and floor.

Last week’s episode in which we discuss The Haney is available now, and this week’s episode—a commission about fixing NCAA judging—will be available…fairly soon-ish.

WATCH HERE Club Gym Nerd members can watch the podcast being recorded (pre-edits with all the flubs and hiccups) and see video of the routines we discuss. THIS WEEK Mark Alesia, formerly of the Indy Star and part of the team that reported the Criminal Ex-Doctor story, joins us to discuss Athlete A and #GymnastAlliance The Dutch federation has shut down the women's elite program to conduct an investigation into coaching abuse. What does it all mean? Terin Humphrey is a survivor. We discuss reconciling that with her…other behavior and why her complaints about USAG removing her don't really add up. What Terin has to say about Steve Penny trying to influence team selection Chellsie's comeback – it's officially official! We talk about her skills and her interview with the Olympic Channel Sam Mikulak says he will retire after the Olympics, citing a chronic wrist injury and a desire to preserve his mental health MINI-COMMISSION Desirae asked us to come up with a gymnastics coaching qualification system for the US—what courses, information, and classes would we require? We have a lot of suggestions. GYMTERNET NEWS A story of abuse allegations coming out of New Zealand that we have some questions about Australia's Human Rights Commission is reviewing Australian gymnastics Some…unfortunate incidental translation issues from the FIG The Pac-12 football boys are making Jessica's dreams come true Plus, spending the day with Aliya JOIN CLUB GYM NERD Join Club Gym Nerd for access to Behind the Scenes episodes. Buy our awesome clothing and gifts here. We have masks too! RELATED EPISODES 434: Svetlana Khorcanceled 433: Weirdest Gymnastics Exhibitions of the 90s (Commissioned) 432: #GymnastAlliance Best of GymCastic: The Leotard Episode 431: 2003 Team Final (Commissioned)