So here we are. The first day of elimination meets in the 2021 season, where we find out who…gets to put a postseason victory on their record before getting eliminated tomorrow.

NC State is probably the biggest favorite in any of the play-ins—because they shouldn’t have had to participate in these meets in the first place—having gone 196 in five of the last six meets, while Western Michigan has been stuck in the 194s at the last three competitions. It would be a big surprise if Western gets through this one.

The one I’m most eager to see is Penn State/West Virginia. Penn State is ranked better but has also been stuck in the mid-195s most of the year because of vault and floor struggles. The team finally got those events to a better scoring place at Big Tens, only to count a mistake on beam for a 195.4. If they put it all together, we could see a 196. But then we have West Virginia, the home team, finally starting to turn it on in the last couple meets of the season to get the scores required to make regionals at all. West Virginia’s 195.7 from Big 12s also included a counting mistake on beam, better than Penn State’s score for a similar kind of meet.

Eastern Michigan and Maryland start an hour later and are ranked basically identically. Maryland probably has the higher scoring potential but is also missing several important injured athletes, which we’ve seen manifest in some declining bars and beam scores the last couple weeks. Both teams struggled on beam at conference championships (a theme!), but it will be especially important for EMU to hit a secure beam rotation to undermine the advantage Maryland should have on other pieces, particularly vault, where we’ve seen some higher 9.8s for Maryland’s Yfulls.

In an surprise, Temple comes into the meet against Arizona as a numerical favorite after that massive 196.500 from the conference championship. Until the month of March, Temple was a 194 team, so the question is whether this sudden and dramatic upswing can be maintained against a team with a few more expected 9.850-9.900 scores. And whether Arizona can bring the security in the Yfulls and the middle bars lineup to stay in this thing early and then hand it to people like Jessica Castles on the final events.

END_OF_DOCUMENT_TOKEN_TO_BE_REPLACED

Deep breath. Let’s do this.

The first sessions of Big Tens (and no, I will not call it B1Gs, thank you very much) and EAGLs begin first. So there’s time to set the scene. Lots riding on the score Nebraska puts up early on as that will dictate what all the other 36-ish teams are looking for. Maryland and Penn State are also not totally out of the woods in that regard and are looking for a comfortable hit today to remove any doubt, but Nebraska is the most urgent case in the ER.

The minimum goal for Nebraska is 195.300, which will be enough to move ahead of New Hampshire and gain one spot of buffer room, but that in itself is just a minimum and not a “safe” score when factoring in what Arizona and Washington and West Virginia could do. Nebraska’s real goal will be to bust out for a 196 to put extreme pressure on the later teams.

North Carolina also begins in this first group, but as UNC is down in 40th, their fate is going to be determined by other teams. They need to get some huge score and then just hope that enough other teams miss.

So far I’m really enjoying the “everyone gets a 9.2” aesthetic of the Minnesota live scores test.

END_OF_DOCUMENT_TOKEN_TO_BE_REPLACED 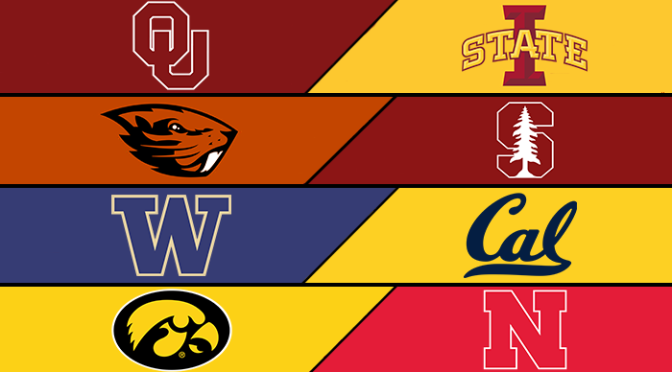 In the first meet, Oklahoma is looking for anything better than 197.800, which would allow them to take sole possession of first place and bump Florida to second. This is Iowa State’s second competition of the weekend, and after a non-counting score earlier, they’re looking for something in the 196s to count, though they’re in a pretty safe ranking spot, so it’s not a huge deal.

No Audrey Davis in the lineups for Oklahoma today.

END_OF_DOCUMENT_TOKEN_TO_BE_REPLACED 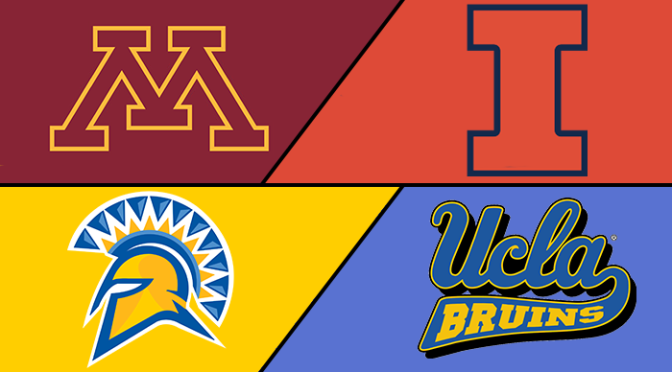 In initial action today, Penn State leads Rutgers 97.875 to 97.700 after two events. Penn State did not have a great bars rotation, but picked it back up with a season high on vault to get closer to 196 pace.

LIU got its best vault score of the season against NC State, which is on track for a very high 196 after two events. Going over 196.800 would make this a top-5 all-time score for NC State. Also the ranges on these LIU floor scores have been something else.

END_OF_DOCUMENT_TOKEN_TO_BE_REPLACED 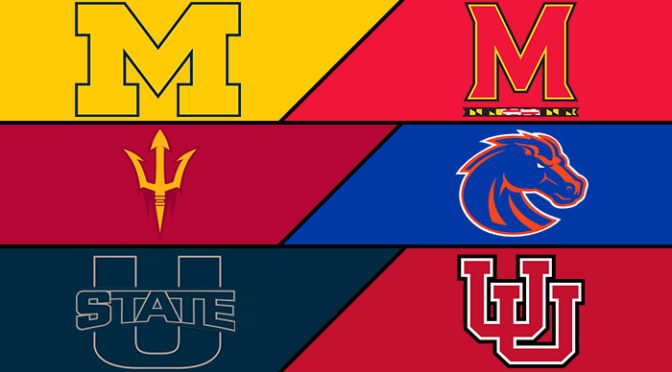 The last Friday of the regular season! Next time we do this on a Friday, it will be the regional semifinals. It’s not a usual Friday because of the absence of SEC meets, but I’ll be starting out with Michigan’s visit to Maryland, finishing with the ASU/BSU and Utah meets, and then sampling the buffet in between as the mood strikes.

Maryland currently sits in 28th place—the final spot that would avoid play-in meets—but also still has a 195.3 to get rid of today so could make this situation a lot nicer with some home finale 196.0.

Michigan will be eyeing the high goal of 197.775, the score required to move ahead of LSU in Monday’s rankings.

END_OF_DOCUMENT_TOKEN_TO_BE_REPLACED 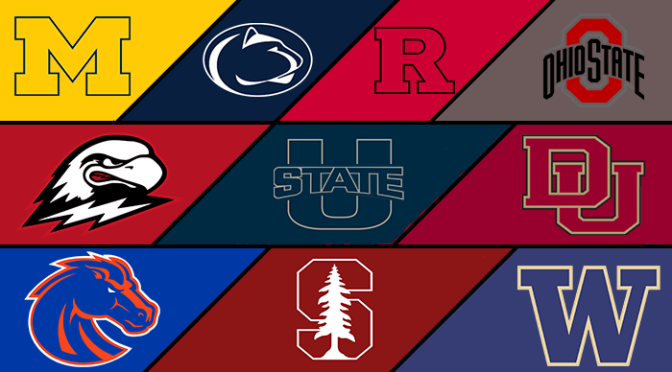 Very interested to see where Michigan’s score ends up and how those lineups look without Brenner. Given all the everything that happened this weekend, Michigan is looking at needing a 197.125 to tie Minnesota for 6th in the new rankings, while it would take a 197.450 to tie Cal for 5th place, and a 197.625 would be required to tie Utah for 4th.

Rutgers is also starting to see the top 36 pull away from them and could really use some kind of mid 195 to stay in sight of the regionals spots. Penn State is looking pretty solid for regionals right now, but is going to need another score verging on the 196 zone to try to avoid the play-ins.

Also, I forgot to cancel the monthly Denver subscription before it renewed, so you can bet I’m going to live blog that one to try to get my money’s worth. Also, Stanford. What’s up with that? I’d like to find out today.