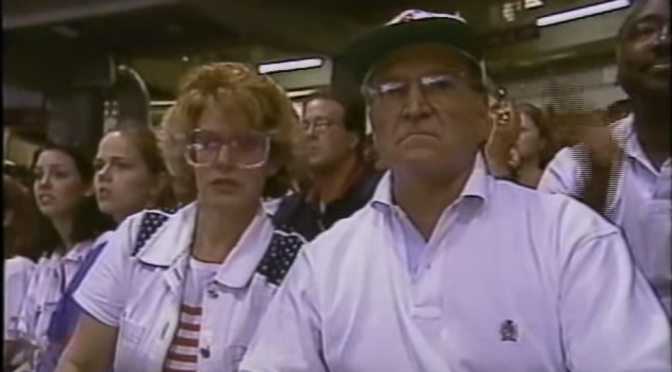 There’s something in the air on this warm Olympic night. Do you feel it?

Well do ya, punk?

What exactly is in the air is left open to the viewer’s interpretation. But I feel like it’s probably swine flu.

Unless doing a voiceover like a sonorous predator who makes everyone want to take 100 showers and become an arsonist is airborne now, because then it’s definitely that.

Really, who wrote this, and how did it get approved…by a person?

“Little girls dancing. DO YOU SEE?”

You know that thing where you refer to a bunch of college freshmen as “little girls”? Like how that happens and isn’t just the creepiest thing anyone has ever done?

Highlights of compulsories include Kerri Strug being so Olympics that Martha surpasses neck-pinch and goes straight for the chokehold. Never seen since. #Simonegoals.

And how can we forget innertube patient zero?

“RUSSIA. No longer the specter of evil.” Christ. Who dredged up Cold War McGullicuddy for the broadcast? No oversimplification of complex geopolitical situations through the use of uncomfortable jingoism here…

Like…how is this even a situation? Why are you getting a calf massage from a medieval peasant draped in a rag toga while posing like the damn Cleopatra? What world is this?

As for Romania, all of their families are super dead or whatever, but “the blade of grief keeps them strong.” Phew. I was worried about how Romania would be shoehorned into this definitely-a-war, but Grief Blades. Got it. ALL THE GRIEF BLADES. SLAYYYYY…?

“Always Romania’s shining stars. Their prayers this evening are to keep the legacy of Nadia forever.”

I guess the Romanians just don’t have enough GRIEF BLADES these days.

What’s that I hear? “Simple Gifts” is swelling to 11? That can only mean one thing: the arrival of the Good Guys Team, a.k.a. the fresh-faced, happy-American-little-girl, living-parent-having, non-commie, non-background-smokestacks, non-evil TEAM USA PERFECT.

There’s something in the air this warm Olympic night. 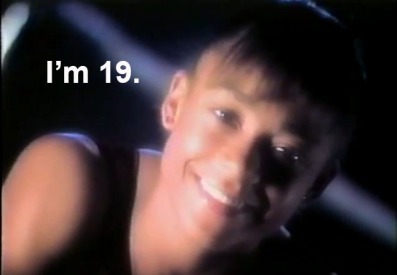 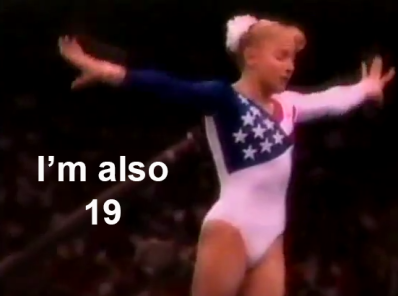 Welcome to the arena, featuring the cheering of a loud, energetic, and engaged crowd! What a wonderful moment for gymnas…I mean, oh, how dare those ignorant KFC-guzzling blue whales viciously steal the Russians’ rightful gold with their American caterwauling that definitely did it. Yeah. That.

“Marching as to war, these seven little girls.”

Oh, was it not clear that we’re making this into a war? Because it’s a war. Did you think it was a sporting event? That wouldn’t be exciting. SHOOT THE BAD RUSSIANS WITH YOUR BOMB-GUNS, DOMI! DO IT FOR MURICA!

And now, the most important topic of the day: skirt or massive 1996 shorts? The world may never know.

We finally meet Cold War McGullicuddy in the flesh, joined by a prepubescent Tim Daggett and Elfi Schlegel. Why are their voices so high? Tim is the only boy in the choir who’s still an alto, and Elfi just sounds like a little sparrow.

Tonight’s guest star is Nadia Comaneci, seen here in the role of the woman who goes back to work at the ad agency after having kids and that’s the plot of the movie because of early 90s. 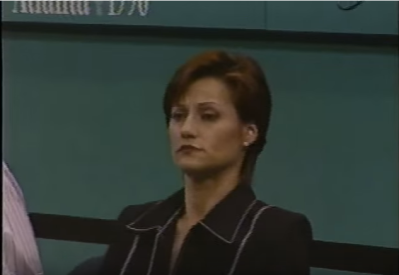 Nadia thinks the 1100 broken legs might hurt the Romanians. Well I’ll be.