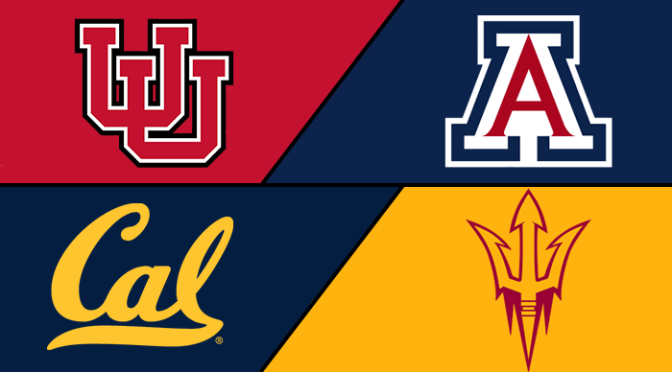 It’s going to be a Pac-12 experience today with Utah/Arizona and then Cal/Arizona State. Things didn’t…go awesome for some home favorites yesterday like UCLA and LSU, so we’ll see if a day of ranked favorites competing on the road works out a bit better.

Looks like O’Keefe is leading off for Utah in the initial bars lineup. Everything else looks as expected. Still no Jillian Hoffman in lineups.

Intros happening now at Utah/Arizona. We’ve moved to the one-touch warmup and selected which poor souls have to sit on that couch, which means it’s nearly time to go.

O’Keefe – UB – Utah – bars was…not ready yet. Anyway, now she’s starting – toe on to maloney to pak, small legs but fine, back arch cast 1/2 on low bar, double arabian, better, small step back but got it. I can tell you barely anything about cast handstands because the stream angle is so bad. 9.800

Leung – VT – AZ – holds the stick on her full – good distance – some piking in the air, some stagger on landing, so a few things to take but a strong one. 9.825

LeBlanc – UB – Utah – blind to jaeger to overshoot, solid, a bit late on blind – DLO, clean legs together position, stuck landing. Nice. Maybe her best this year but we’re told one of the casts was also short. 9.800

Isa – UB – Utah – good first vertical – Ray, solid, a bit soft in legs/feet – very clean bail position, nice – hits final cast on high – giant full to DLO, stuck. Strong. We have a better camera angle now. You can take some soft back position on those straight-body casts, but she gets to vertical in the end. 9.925. They didn’t take for back position, appreciating that she was doing straight-body and getting to handstand.

Swanson – VT – AZ – nice full, best dynamics of the lineup so far, minor bounce back – some foot form throughout

Arizona will break 49 on vault.

Efficient rotation for Utah. Some handstands and landings that led to some 9.800s where they would have wanted 9.850+, but no one gave away that much or anything too large. Isa and Tessen are taking the risk in doing straight-body casts, which is normally a harder prospect with no actual benefit in the scores, but they’re doing them quite well.

Hoffman does exhibition on bars for Utah, a hit, but not a routine I’m bumping anyone out of the current lineup to get in there.

There’s something called the “can jam” and…guys.

Leydin – UB – AZ – toe on to pak, straddled position in the air – good handstand on high – 1/2 to khorkina, hits it – giant full to double tuck, was late on the full and didn’t quite have the timing on her double tuck, short with a bounce forward. 9.750

The judges were given some instructions last season to be harsher on short landings on vault, and like most instructions, that has pretty much entirely gone away this season.

Swanson – UB – AZ – a bit short on first hs – giant full to tkatchev, low but OK – pak, straddled position again – looks like she’s missing these casts – DLO, pikes down to get the stick. 9.800

Reinstadtler – VT – Utah – a clean full as usual, she bounced back, fairly large, but not the huge, huge bounce we were seeing in some earlier meets. 9.825

Hendrickson – UB – AZ – jaeger into overshoot, was low on the jaeger and missed one of her hands on the overshoot, amazing that she kept going and got her hand right back on – DLO 1/1, hit routine though she should get a pretty large deduction for the form breaks ensuing from that missed hand. 9.575

O’Keefe – VT – Utah – getting better on that full, step back, some leg break on the block and a little piking down. 9.800

Kane – UB – AZ – blind to jaeger to overshoot, fine, a little low/close on her overshoot than you’d like – blind into double front, very late on change on high bar, step back on double front. 9.775

Brovedani – UB – AZ – blind to piked jaeger, nicely done – toe on with some elbows into pretty pak, good height – cast 1/2 on low is pretty good – DLO, comes up short with a bounce forward, was going really cleanly but that should be at least a tenth and a half on dismount. 9.825

Berg – UB – AZ – blind to piked jaeger to overshoot, best amplitude of the bunch – small arch on final cast but pulls it back – high FTDT, stuck landing, excellent dismount. I’d imagine a very high score the way this rotation has been evaluated. 9.950

A fine-not-awesome vault score for Utah for a fine-not-awesome rotation. Hit vaults, but no sticks after Soloski, so it’s always going to be very hard to get into the 9.9s. A bounce back and on a full or a short 1.5 can only score so well.

Isa – FX – Utah – double tuck, comfortable, controlled landing – back 1.5 to layout, shortish on the layout landing, arched it around – switch side to popa looked fine even if we had a closeup of her face because leaps don’t count – double tuck, also under control. 9.850

Stauffacher – BB – AZ – near check standing up after her mount – bhs loso series, a larger check with one of the feet going up but a bit more extended – split 3/4 with a lean at the hips – aerial, another larger check with a leg-up – split jump 1/2 from side, some form, small adjustment – gainer full, bounce back. Enough things that you want that to be the drop score. 9.475

Paulson – FX – Utah – double pike, small slide back – front lay to front full, fine – switch to switch full, comfortably performed, very elite-running-passage – 1.5 to layout, also a little low on that layout, not rising up into it. 9.825

Leung – BB – AZ – bhs loso, looked pretty in the air but a large wobble on landing, bend at the hips to correct and then another adjustment trying to save the bend at the hips – switch 1/2 to beat, short of position on switch 1/2 – switch hop to aerial to back full, nice finish. Got away with 9.750 there somehow.

Reinstadtler – FX – Utah – double tuck, solid chest position on landing, well controlled – 1.5 to layout, cleaner on the layout, not a ton of rise but enough to maintain her extension throughout – switch ring to split leap full, good split positions, a bit under-rotated landing the full – oooof, double pike, well short with two large lunges forward, nearly a knee down. 9.425. They got her for that.

Hargrove – BB – AZ – bhs loso series, nice amplitude and toe point – side aerial, comfortable – split jump to sheep, not very much closure on the sheep, will get credit, but it’s risking no credit – 1.5 dismount, step back. 9.800

O’Keefe – FX – Utah – double pike, short with a hop forward – front lay to front full, covers landing into a dance out – switch to split leap 1.5, looked pretty close to around – 1.5 to layout, better height on layout. 9.825

Brovedani – BB – AZ – this commentator loves the word “splash” – beat to sissone, nice – aerial and leans through it to connect to back tuck, some balance deductions on both though – switch 1/2 to split jump, nice jump, the switch 1/2 could be a little higher – 1.5, stuck landing. best of the rotation so far. Or not. 9.750. These 9.750s and 9.800s in this lineup have been of…varying quality.

Davis – BB – AZ – bhs bhs loso, controls it with only a small check – beat to straddle 3/4, nice extension there – kickover front, works into beat, just a little forward on her kickover so the beat wasn’t too high – 1.5 dismount, hop forward. 9.800

Arizona goes 48.900 on beam after hovering around the 9.800s in that rotation. (Also interesting that Cowles is only in the exhibition spot.)

Utah gets some huge final saving score for the beam rotation to go 49.375 there. It was a little underwhelming at the beginning and needed saving.

Orman – FX – AZ – lay to rudi, some messy leg position, mostly controlled – double pike, some chest position and knees in the air, another solid landing – switch side to popa, a tad short of 180 on the popa – a sturdy showing, a couple positions. 9.775

Swanson – FX – AZ – music problems, she gives good “you fucked up my music, bitch” face – she ends up launching well forward on her front 2/1, a couple lunges and goes OOB – secure landing on her final double tuck, chest down. 9.550

O’Keefe – BB – Utah – side aerial to loso, quite strong – switch to split, good – smooth full turn to sissone – switch hop to side aerial to full, hop back. Good one. Beam is the one event where O’Keefe has looked like O’Keefe in her first month of college gym. 9.900

Davis – FX – AZ – front 2/1, controls the landing, some soft knee position but not bad – rudi to double stag, a bit bouncy in some of these dance element landings – back 1.5 to layout, nearly slips on layout landing but deals with it, small deduction. 9.800

Randall – BB – Utah – smooth full turn – bhs loso series, very strong – beat to sheep, sheep is OK, some legs – lone sissone – comfortable rulfova this week – 1.5, stuck landing. One of her best beam routines. 9.875 is surprising because they’ve been willing to go high in this meet. I thought we would see 9.950 for that, honestly.

Hargrove – FX – AZ – nice height on double pike, shows the toe point, bounce back though – back 1/2 to front full, takes it right to the edge but stays in, a flatter pass – switch ring to split leap full, kind of low – double tuck, good control. 9.825

Berg – FX – Az – front 2/1, good height, just a small slide forward – switch to split jump full to wolf jump full, will get deducted for 180 on both split elements – 1.5 to front pike, gets it around, a bit low – rudi to split jump. Some more ragged moments in this routine than she would like but a fine hit. 9.825

Every routine is the same.

Paulson – BB – Utah – side aerial to loso, very strong from her as well – switch to split, solid back leg positions – full turn, basically covers a hesitation – hitch to side aerial to full, off to the side on her dismount and a slide back

Leydin – FX – AZ – front tuck through to double tuck, short with a step – switch side to split jump full, nice position on split, overturned the switch side by a hair, but it’s a leap heavy routine because she can hit the positions – double pike, quite out of control -a lunge back and then 16 more little steps into the corner

Utah finishes up on 197.300, which is a season-best score, close to the 197.5 I was looking for from them this week with still lots of areas to improve. Beam was the only event that I would characterize as a particularly strong rotation.

Leydin’s 9.725 gives Arizona 195.975, which is regionals-fine and about on track with what they’ve been scoring at home, though not as high as last week’s number.

OK a short break until Cal/ASU.

Cal/Arizona State is supposed to be starting now. No current live stream, which is cool. What are you, Stanford?

They’re “working to fix it.”

I wish we could see it because these ASU vault scores look like…a lot. Meanwhile Cal has to count a 9.400 on bars and goes 48.825 there. Not great.

ASU now confirmed that there will be no live stream for the meet at all. OK byeeeeeeeee.