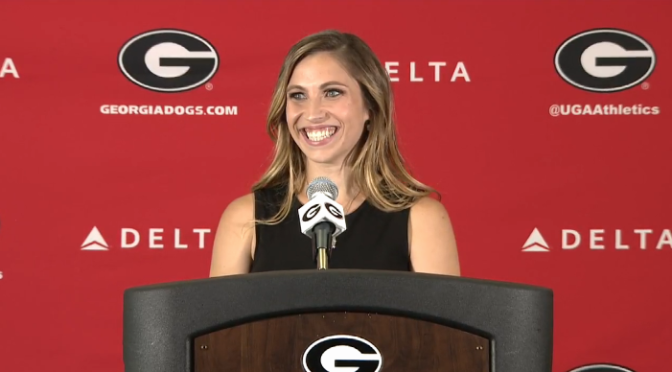 Breaking news. We learned today that the new head coach of the Georgia gymnastics team will be……..Suzantney Kupoculan!

The press conference began with Southern McGlasses going, “blah blah blah tradition of excellence blah blah,” with Kupets lurking in the corner like

Captain McGlasses then announced that the new head coach of Georgia’s gymnastics team will be none other than the portion of face sitting next to him, the gymternet’s sun and stars, Courtney Kupets-Carter. He then added, “there’s definitely not anything more to the story than this. Wink wink. The owl flies at midnight.”

Kupets then got up and told us that

which was really all we needed to know. END_OF_DOCUMENT_TOKEN_TO_BE_REPLACED 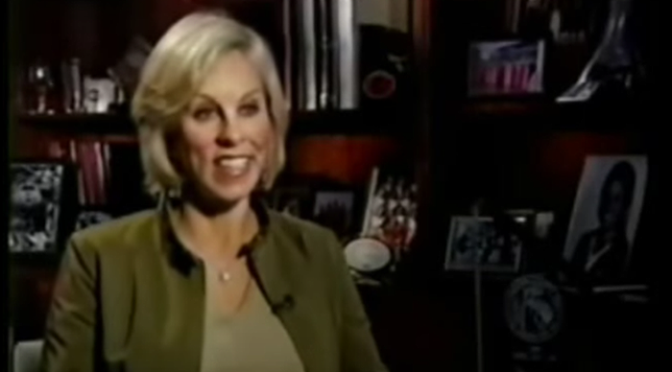 Back in 2007, our beloved Suzanne Yoculan—or Suzie Yocks, as no one calls her but me—woke up one morning and said, “I can’t believe you think I like attention!” and invited cameras into the gym to profile her team’s preparation for the 2008 season in AFI’s #1 all-time best film ever, Under the Lights: Georgia Gymnastics. Directed by Suzanne’s hair, produced by Suzanne’s heels, it costars Suzanne Yoculan and Suzanne Yoculan.

The team opens proceedings by gathering around a giant G so that Katie Heenan can ominously threaten us that we’re about to go Under. The. Lights.

“Hey Katie, could you do another take, but this time make it 64% less Guantanamoy?”

Next, we meet Suzanne and some other nameless rabble who are here to tell us how awesome they are. They’re pretty awesome.

She gives us her best recruiting spiel about Georgia’s pedigree of champion awesomeness while surrounded by all her most comforting and supportive trophies, including what appears to be a glass foot because of the reasons.

For…Best Performance by Heels on a Competition Floor?

Meanwhile, Jay Clark goes, “We’re the best team, we’re always going to win the national championship, and I can’t imagine anything possibly changing that ever.” Me neither. END_OF_DOCUMENT_TOKEN_TO_BE_REPLACED

1. Some European gentlemen are here

Qualification has concluded at Boy European Championships, and as expected, Russia and Great Britain qualified well ahead of the rest of the field and will be fighting it out on Saturday to see who can take the moodiest team selfie. I mean…win a gold medal? Or something?

The title probably should have been Great Britain’s to lose, but following the withdrawal of Max Whitlock, the Fightin’ Faded Empires have had to put up a few D scores in the 5.8-6.0 range that they wouldn’t normally have expected to use. So, in spite of a qualification performance much cleaner and less Russiay than Russia’s, Great Britain trails by seven tenths and, in the team final, will need to rely on Russia to be very Russiay in several of the most Russian places in order to come away with the title.

Team Oleg and Team Pablo Braegger’s Earring also emerged from qualification within a reasonable range of each other and should duel for bronze. Meanwhile, Romania got a 1 on high bar and will be using Ponor from here on out.

In event news, there will be no Hungarians in the pommel horse final, no Germans in the HBar final, and Stepko didn’t make PBars, so…what is this world? Verniaiev made four events finals, just missing rings and pommel horse because they’re the stupidest. Denis Abliazin also missed out on the floor final after going OOB, because of course he did. If gymnasts could get deductions named after themselves, a 0.3 neutral deduction for going out of bounds on floor would be the Abliazin.

Also, we really need to start naming deductions. “She hits the Jaeger, but will get a Raisman.” “The judges will deduct for Chelle Stack on those back handsprings.”

In the junior event, One-Direction-haired little cherub Giarnni Regini-Moran continued being New Tom Daley and is really forcing us to have to try to remember how to spell his first name by nearly Bilesing the field to win the all-around.

2. The Classic roster of secrets

Fitting its name, the announcement of the Secret Classic roster was shrouded in mystery yesterday when shortly after its release, both Bailie Key and Norah Flatley were quietly removed from the list. Conspiracy. Government denies knowledge. The truth is out there. END_OF_DOCUMENT_TOKEN_TO_BE_REPLACED